Congratulations to all the hard-working members, past and present, for this recognition. You have earned it!

To all to whom these presents shall come- Greeting

WHEREAS safe, clean and well-maintained schools are critical to the excellence of Bristish Columbia’s public education system, and

WHEREAS these workers have been represented since 1945 by the International Union of Operating Engineers (IUOE), one of North America’s leading labour organizations, and

WHEREAS the IUOE Local 963 is celebrating its 90th anniversary this year as a leading organization in Vancouver’s labour movement;

NOW KNOW YE THAT We do by these presents proclaim and declare that July 22, 2020, shall be known as “90th Anniversary of IUOE Local 963”

in the Province of British Columbia.

IN TESTIMONY WHEREOF, We have caused these Our Letters to be made Patent and the Great Seal of Our Province of British Columbia to be hereunto affixed.

WITNESS, The Honourable Janet Austin, Lieutenant Governor of Our Province of British Columbia, in Our City of Victoria, in Our Province, this seventeenth day of July, two thousand twenty and in the sixty-ninth year of Our Reign. 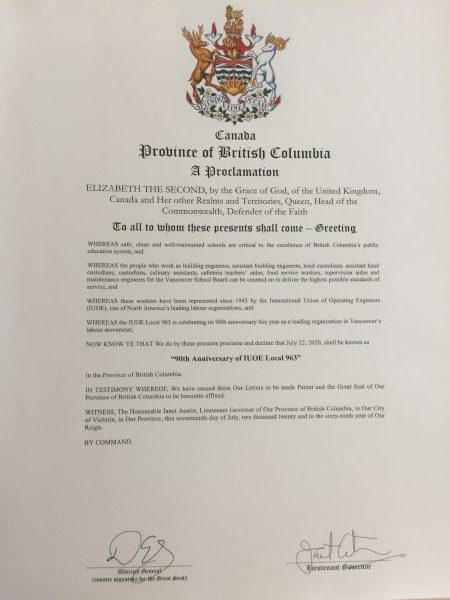 Our office is located at 707 Durward Ave in Vancouver.